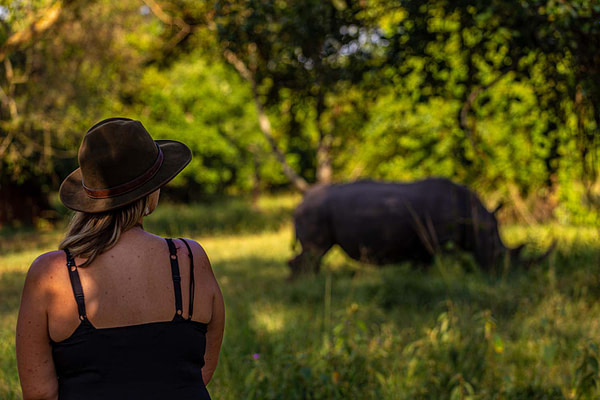 The rhino species of Black and White rhinoceros were present in Uganda – the Eastern Black in the North and Northwest, and the Northern White in the Northwest on the west bank of the River Nile. After the years of civil unrest and poaching, the rhinos became extinct in Uganda. A project to manage the rhino reintroduction program in Uganda was started in 1998 by Rhino Fund Uganda and Uganda Wildlife Authority. The Ziwa Rhino and Wildlife Ranch is located conveniently 176km (100 miles) north of Kampala. This is the only place where you will be able to see rhinos in the wild.

The sanctuary contains over 300 bird species! There are four bird trails within the sanctuary that cover woodlands, swamp,s and savannahs. The bird guides are excellent and this is an activity that cannot be missed by bird lovers! (Best times for this activity: 07H00 to 09H00 and 16H00 to 18H00). Bird species include Shoebill Stork, Brown Parrot, African Crowned Eagle, Black Kite and so much more.

Other mammals that call this park include Antelopes, Bushbucks, Hippos, Crocodiles, Reedbucks, Oribis, Duikers, and primates like monkeys.

Our representative will pick you up from the hotel after breakfast and drive to the Ziwa Rhino Sanctuary located on the Gulu highway towards Murchison Falls. On reaching the sanctuary, we shall do Rhino tracking on foot, usual time spent with the rhino is one hour with a guide to accompany you and explain the animal behavior. After trekking, have lunch at the sanctuary and then head back to Kampala city arriving late evening. End of Tour.