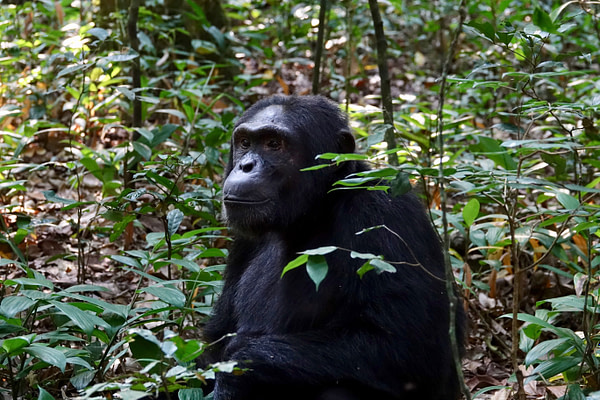 The density and diversity of primates in Kibale National Park is the highest in the whole of Africa. This is the primate capital of the world. The most well known of its 13 species are the chimpanzees. Additionally, Kibale is home to the uncommon I’Hoest’s monkey as well as East Africa’s biggest population of the endangered red colobus monkey.

Our representative will pick you up from the hotel and proceed to Kibale National park located in western Uganda, 22km southeast of Fort Portal town.

Take an early breakfast before your primate tracking adventure in the forest. As you search for Kibale’s resident chimpanzees, keep an eye out for other primates such as grey-cheeked mangabeys along with l’Hoest’s, red colobus, red-tailed and blue monkeys.

Later in the day, we transfer to the Bigodi Wetlands, situated on the eastern side of the forest in Magombe swamp. Bigodi is punctuated by biodiversity and beautiful scenery and is a birder’s paradise with about 138 species. It also hosts eight species of primates. During this walk, you will have the opportunity to spot some wildlife species that you hadn't witnessed during the trek. These include certain species of primates, butterflies, plants, and birds. Some of such birds include; the green breasted pitta which is endemic to the Kibale forest, the rare Papyrus Gonolek, and the great blue turaco. Some primates include the Red colobus monkeys.
You also have chances of viewing forest elephants, forest buffalos, sitatungas, serval cats, civet cats, and mongooses. After the swamp walk, you will have the community walk which involves experiencing the culture and a few things that are done by the local people. They include; Gin brewing from bananas, coffee processing, craft making, and having a visit to the local medicine man to see the use of local medicine.  Return in the evening for dinner and overnight.

After breakfast, we return to Kampala/Entebbe. End of Safari

NOTE: Chimpanzee Habituation Permit bookings have to be done 3 months prior to the actual day. The months of March to April and November where there is notably less congestion are the best.

We can include additional days on this itinerary so as to experience attractions like game drives in Toro-Semuliki Wildlife Reserve, Birding in Semuliki National Park, visiting Toro Kingdom Palace, visit Amabeere nga Nyina Mwiru Caves.